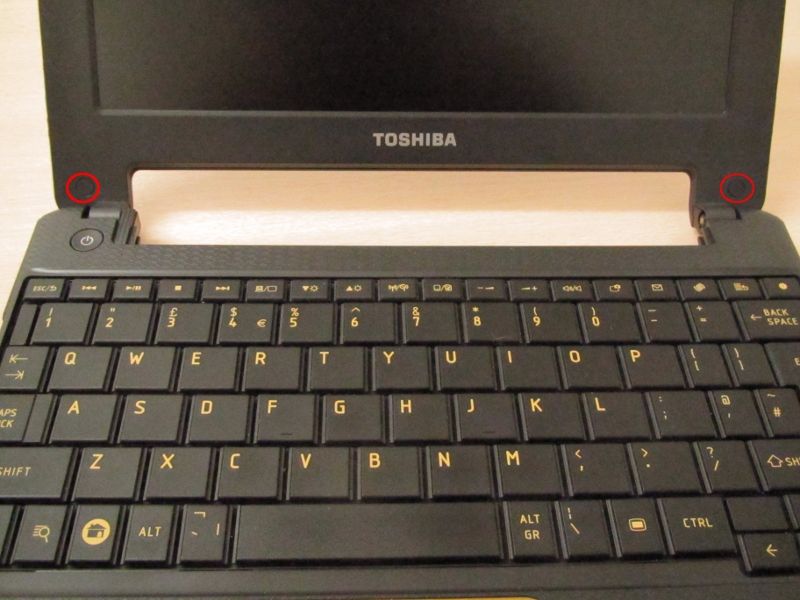 Gently pry the bezel apart using your fingernails or a plastic scraper. If you use something metal like a screwdriver, you are likely to leave unsightly gauge marks around the edges. The trick is to push the inner bezel inward to allow the clips to detach without breaking. 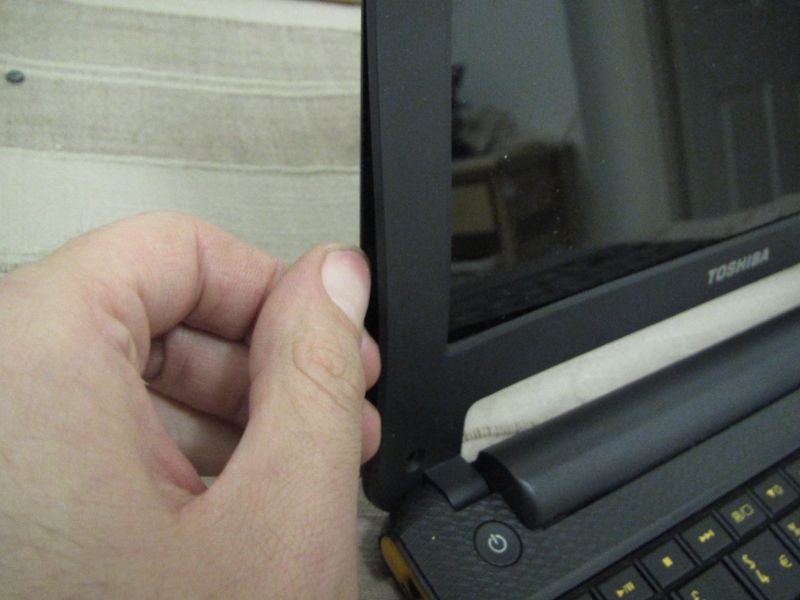 Prying the screen bezel of the Toshiba AC100 apart

Perhaps you may get a better of idea from this photo regarding which direction you should be gently bending the bezel in to pry it apart. 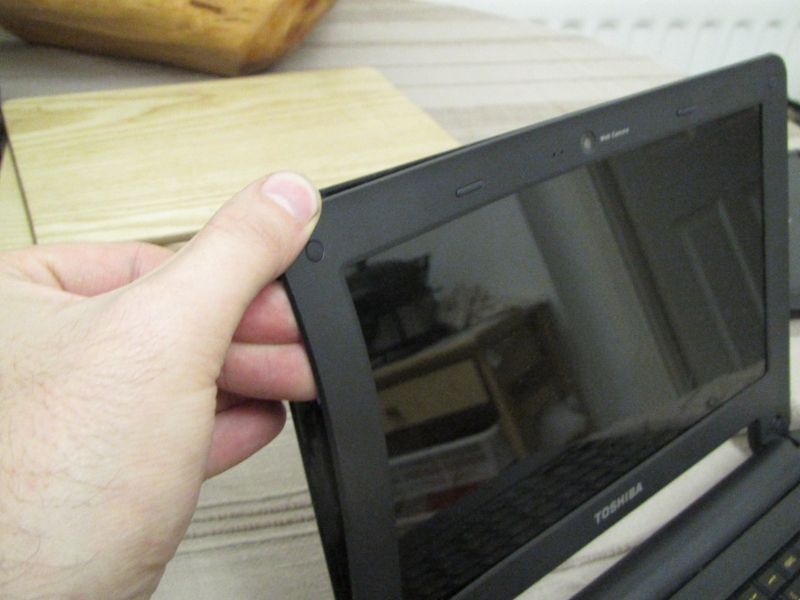 Prying apart the screen bezel on the Toshiba AC100

Eventually the bezel will open up and you will be able to get to the display panel. 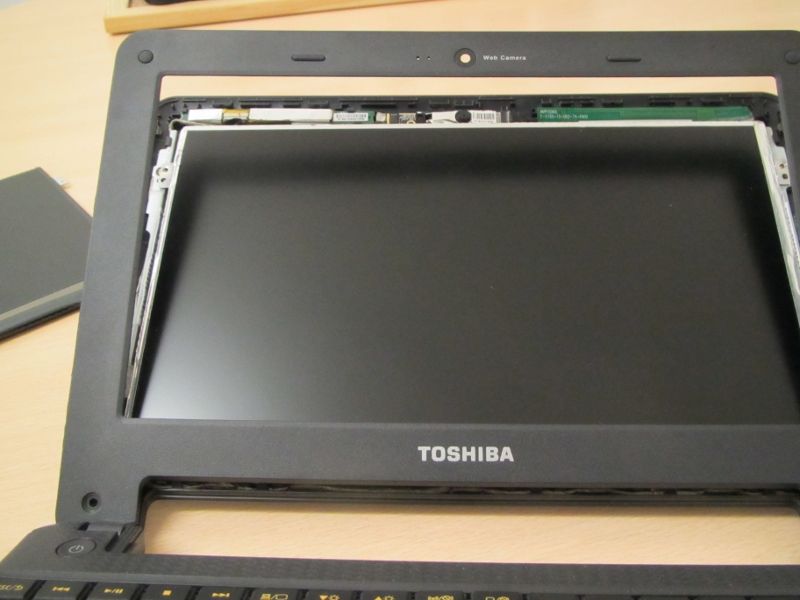 Bezel on the Toshiba AC100 opened up

Gently bend the inner part of the bezel toward you and remove the four screws marked in the photo. Be careful – if your screw driver slips you are likely to damage the screen panel. Needless to say, this applies both while removing the old screen and fitting the new one. 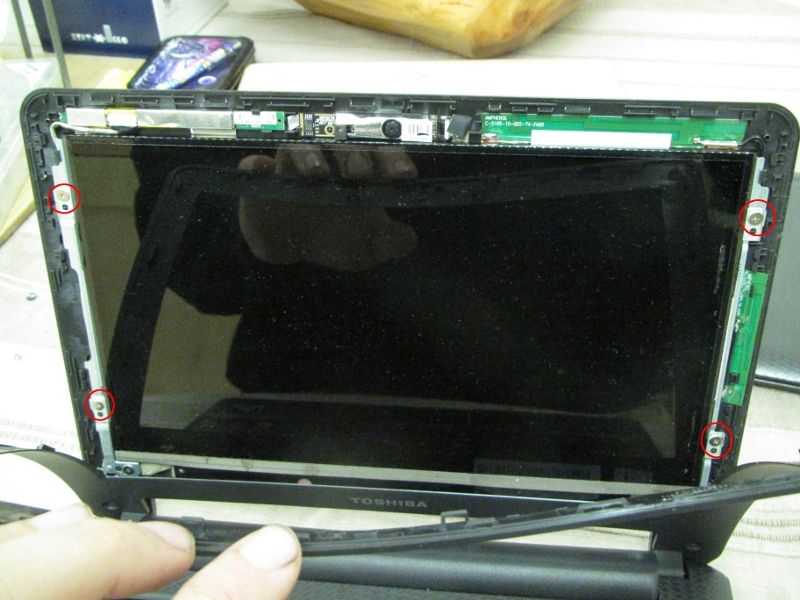 Flip the screen toward you, and you will see the LVDS cable plugged into it. It is held on with tape, so you will first need to pry the tape off the screen. Be very careful when doing this – the connector is quite fragile. 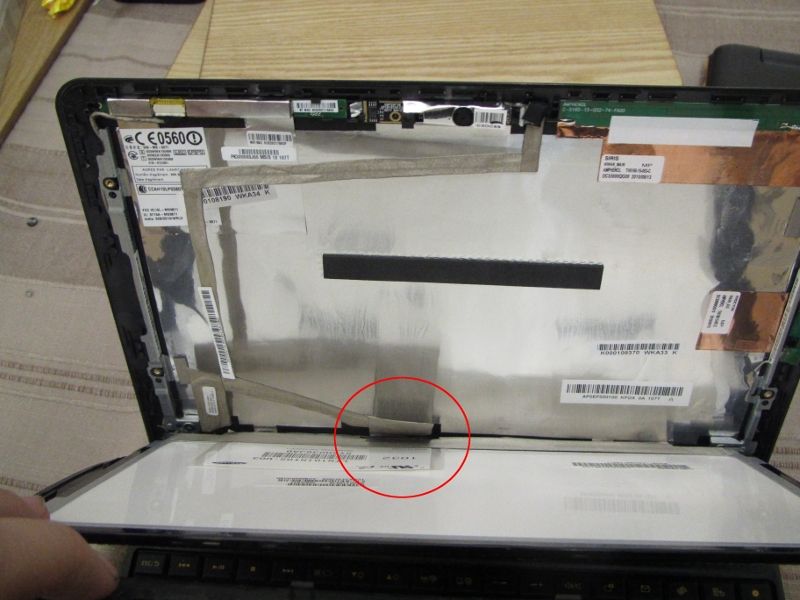 When you have unglued the tape, unplug the LVDS connector and remove the screen. 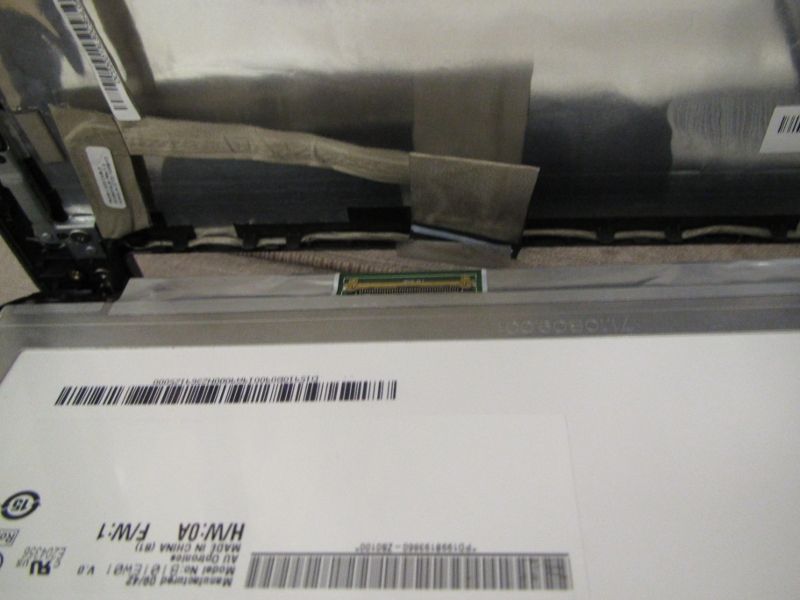 Here is a picture of the removed screen. There are several variants of these panels, and the main thing to look for when getting a replacement panel is to make sure that the LVDS connector is in the same place (or as near as possible). Otherwise the cable won’t reach it. 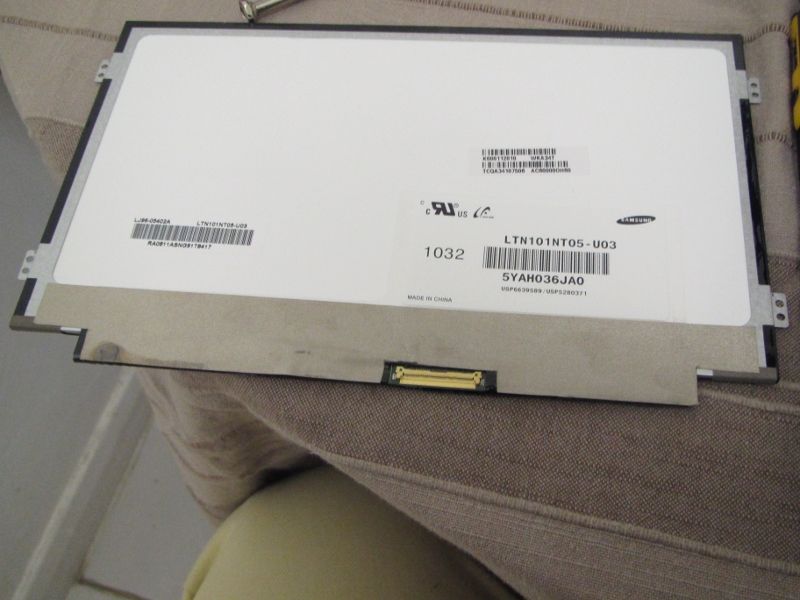 The problem with the replacement 1280×720 panel (AU Optronics B101EW01) is that the mounting points are about 2mm narrower than the original panel. This isn’t strictly a problem, but if you don’t modify it, you will only be able to get two of the four screws back in, and the screen will be about 1mm off-center. 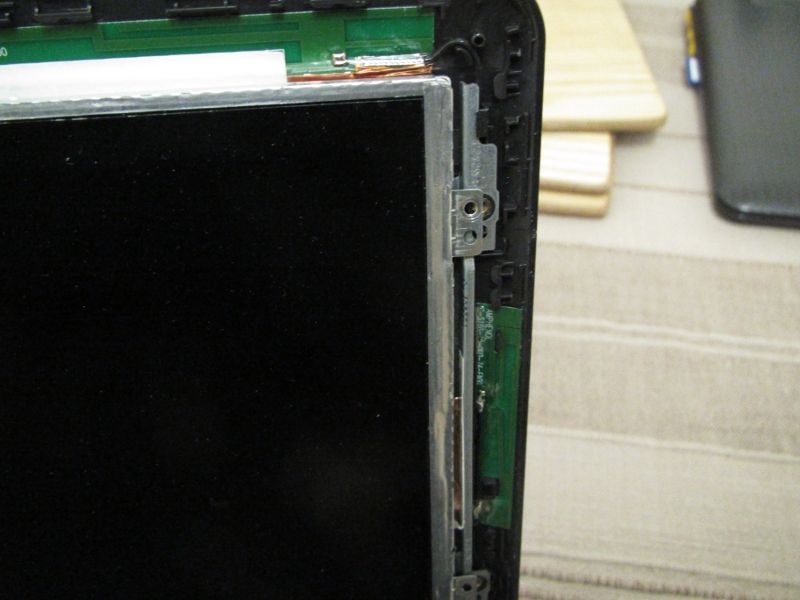 Screen mounts don’t quite line up

To correct this, you will need to modify the mounts on the replacement panel by cutting the screw holes open on the outside. To be able to center the screen, you will have to modify all mounts. 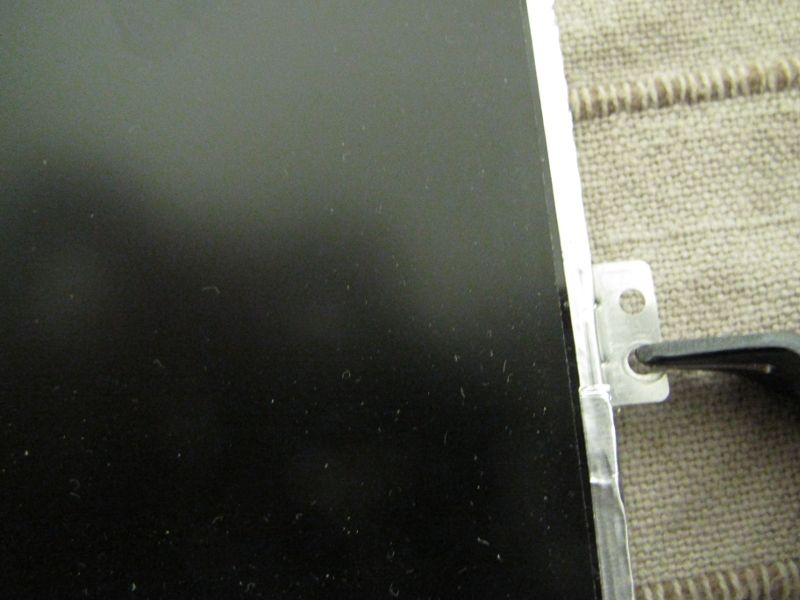 Modifying the mounting points on the replacement screen panel

This is what it will look like when you are finished. Be careful – the bits of metal you will remove are tiny and will try to fly off in a random direction. You don’t want these flying off into something they can short out! 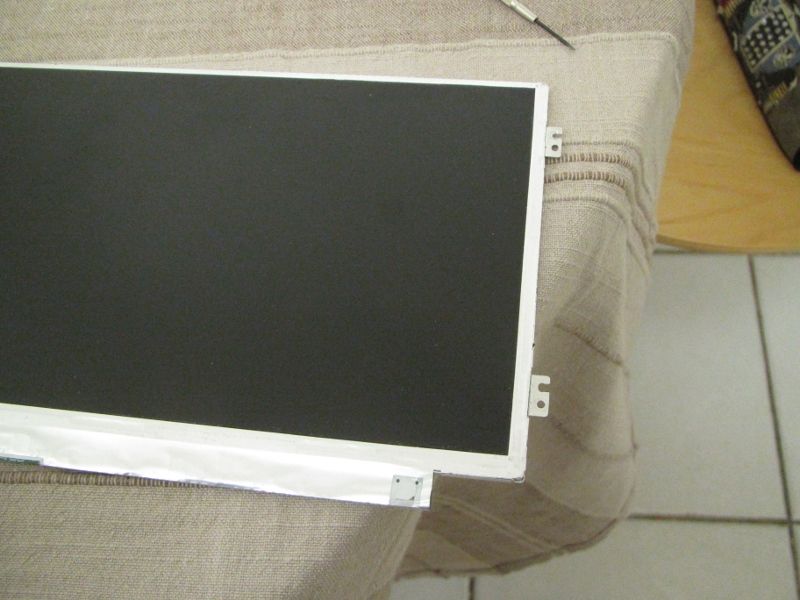 Once you have completed this, the refitting is the reverse of removal. Plug in the LVDS connector, and re-apply the tape – there should be enough stickyness left in it to keep the connector in place. When putting the screws that hold the screen back in, make sure you center the screen – after all, that is why we modify the mounting brackets. Clip the bezel back shut (again, bending it gently toward the inside when pressing it back together will allow the clips to engage more easily. Replace the screws, and the rubber pads (they should still be sticky enough after one removal to remain in place – if they are not, you can use a tiny bit of double sided tape).

That is all you need to do from the hardware point of view, but if you leave it there, you will end up with a 1280×720 panel that only displays 1024×600 in the top left corner. If you look at the splash screen, you will get the idea – notice the white border at the bottom of the splash screen – that is the bottom edge of the 1024×600 area. 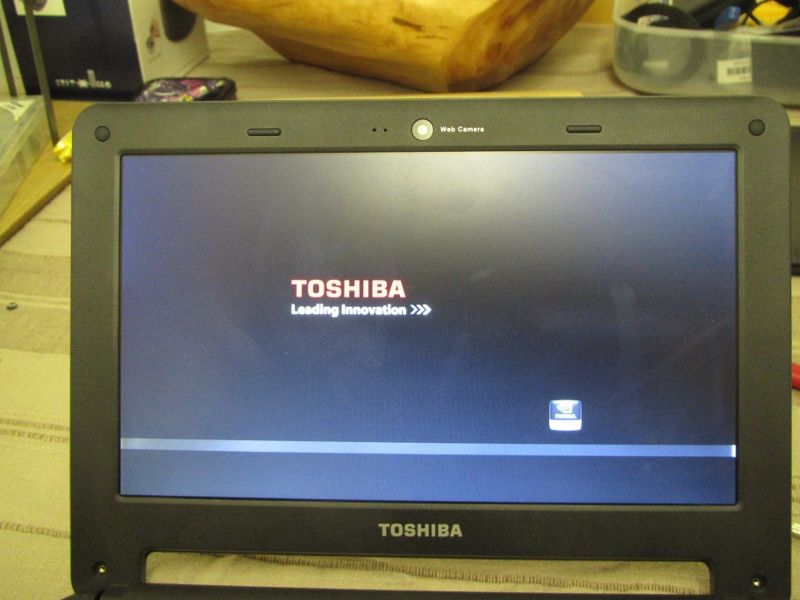 Unfortunately, the screen is initially configured by the boot loader, and since the specification and the source code for this are not open, it is not possible to change it. What we can change, however, is the kernel’s frame buffer driver to re-initialize the screen to the correct resolution. You can do this by applying this kernel patch.

Note: The screen will appear garbled between the splash screen and the point where the userspace re-initializes the display. This will typically happen when your rc.sysinit sets the display font, early during the boot process. Unfortunately, the driver currently doesn’t re-set the display panel as soon as the frame buffer is initialized.

That is pretty much it. I find that upgrading the screen makes a big difference in usability. As far as I am concerned, 1024×600 is completely useless. In comparison, 1280×720 is livable with.