I mentioned in a recent post that I have put together an overclocking kernel for the AC100. Now that I have dialed it in completely and verified the stability and required voltages on all of my AC100s, it is time to share the details.

Before I continue the usual disclaimer applies: if you are doing this – on your head be it. I am not responsible for what you do to your hardware and am making no promises that doing this will not damage it, destroy it, shorten it’s life, or cause you injury in some way. And it most definitely WILL void your warranty.

This part you can achieve purely by modifying the kernel. It is assumed here that the kernel you are using is Marc Dietrich’s 2.6.38 ChromeOS kernel modified specifically for the AC100. You will need the following patches:

1) Toshiba AC100 Tegra2 Overclocking Patch, the common part – this only adds additional clock speeds and makes an increased range of voltages available. You will need to apply this regardless of whether you are aiming for a 1200MHz software-only overclock or a full overclock to 1404MHz which requires a hardware modification to improve the CPU core cooling. This patch doesn’t apply any overclocking on it’s own and shouldn’t break any existing functionality of the kernel if applied on it’s own.

You can only apply one of the latter two patches – either the 1200MHz patch or the 1404MHz patch.

Both of these patches only apply to the two SKUs of Tegra2 found in the AC100:

Tegra Revision: A02 SKU: 8 CPU Process: 2 Core Process: 1 Speedo ID: 0; these are found in the models with Micron memory. These run at lower voltages ([email protected]).

Tegra Revision: A02 SKU: 8 CPU Process: 1 Core Process: 1 Speedo ID: 0; these are found in the models with Hynix memory. These seem to run at higher voltages ([email protected], but they also, bizzarely, often run cooler.

If your AC100 has a different SKU, please leave a comment with the details.

The modification is very simple. The standard cooling setup inside in AC100 is no good. It’s fine for the standard clock speeds, since the CPU will never get hot, but for anything significantly faster it desperately needs to be improved. The standard setup only has some thermal putty between the CPU core and the spring plate above it.

Take a look at this excellent, detailed article on how to disassemble the bottom half of the AC100.

Once you get to the CPU, remove the thermal putty and VERY carefully clean up the top of the CPU core. I cannot stress enough the amount of care you have to take. There are tiny capacitors on top of the CPU package and if you damage any of them it will never work again. 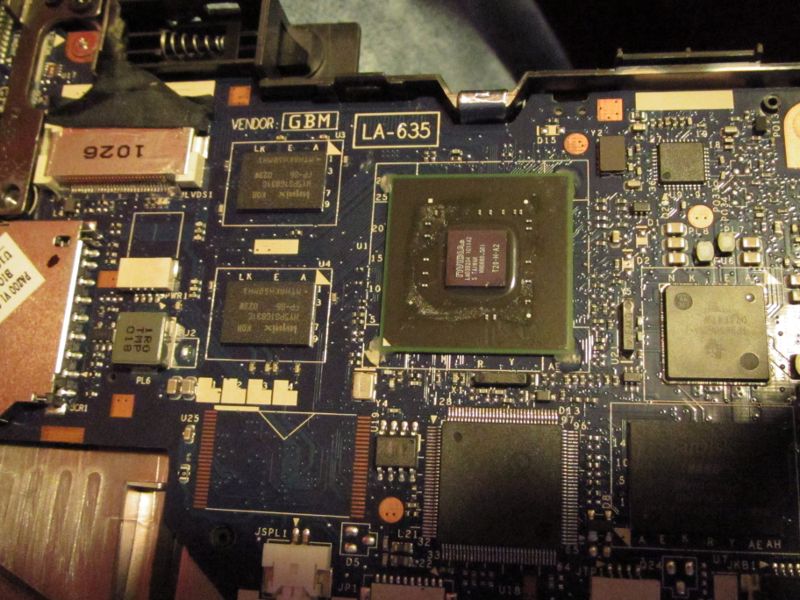 Then apply some thermal compound (not adhesive!) to the top of the CPU. 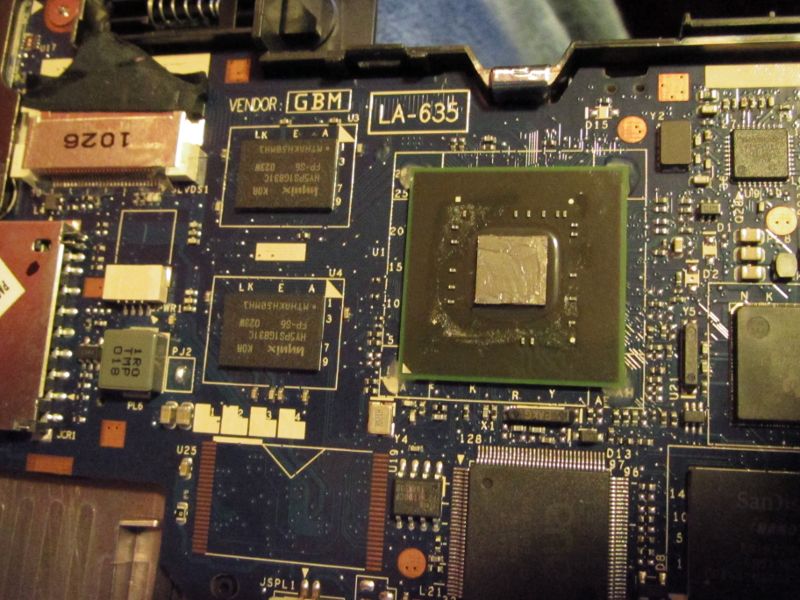 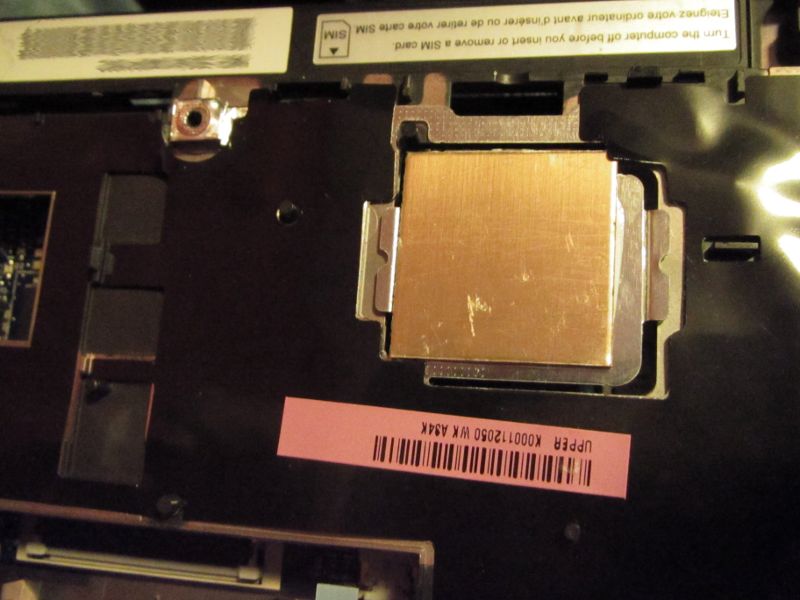 Toshiba AC100 CPU-side shim in place on the spring plate

Before the epoxy starts to set use it to glue the other copper shim to the top of the spring plate. 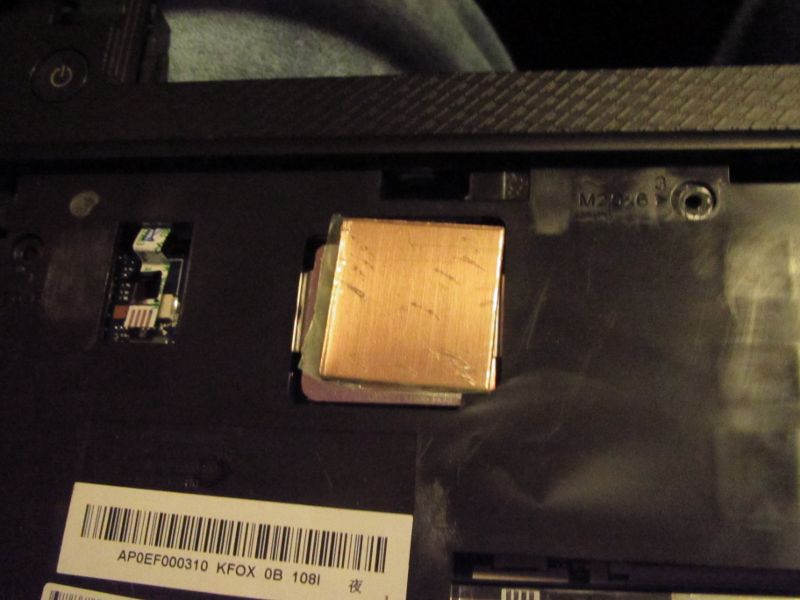 Keyboard side copper shim on the Toshiba AC100

Apply good pressure to the two copper shims and wait for the adhesive to set. It typically takes about 5 minutes from the point of mixing, so you have to work reasonably quickly.

Replace the top half of the AC100 casing, make sure all the clips have clicked into position, and apply reasonable pressure to the shim you can see to make sure that the stack is making good thermal contact with the CPU.

Apply a reasonably generous amount of thermal grease (not adhesive!) to the top of the copper shim. This will transfer heat to the underside of the keyboard. Re-attach the ribbon cables and clip the keyboard back into position. Apply a bit of pressure to the are on top of where the shim is to make sure the thermal compound makes good contact.

Re-fit the 5 screws on the bottom of the AC100, and the two screws at the back that hold the back of the keyboard in place.

AC100 has a thermal protection shutdown feature built in. If the CPU core hits 100C, the machine will power off and will not let you power it back on until the CPU temperature drops below 90C. If you find that you are getting over 90C under load, there is a 3rd, still somewhat experimental solution to this.

The concept of the throttling daemon is similar to Intel’s Turbo Boost technology in the Core i series of processors. When the thermal limits allow, it can boost the speed, as long as the CPU doesn’t overheat. It took me a while to come up with a name for this daemon, but seen as it is for an Nvidia chip, and considering that they used to write their name on the logo as nVIDIA, I called this daemon nITRO. You can download nITRO here.

In the ideal world, the thermal throttling could more cheaply be done in the kernel. The current version of nITRO is written in bash and typically consumes approximately 0.3% of CPU, whereas the kernel implementation would be almost free (assuming you consider 0.3% to be expensive). Unfortunately, the thermal throttling for Tegra in the current ChromeOS kernel is stubbed out at the moment.

If you experience a stability issue that you can verifiably and repeatably pin on the overclock, please post what you did to create the load that causes the stability problem and I will try to reproduce it and adjust the patches accordingly.

7 thoughts on “Overclocking the Toshiba AC100”